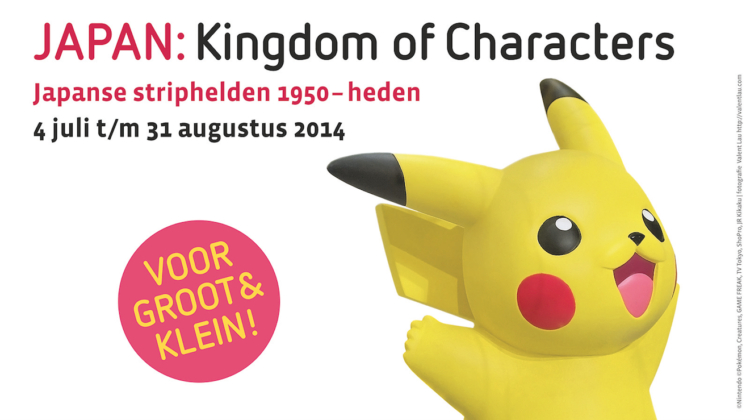 This summer Japan’s famous comicbook figures will feature in the ‘JAPAN: Kingdom of Characters ‘ exhibition that opens in Japan Museum SieboldHuis on 4 July. Meet your favorite ‘charachter’ and come face to face with Pokémon, Moncchichi and Hello Kitty. This unique retrospective highlights comicbook ikons from 1950 to the present.

Tamagotchi, Hello Kitty or the Power Rangers – who hasn’t heard of them? The massive growth of Japan’s sub-culture of manga and animae is evident in the sustained popularity in the Netherlands, however the success of these action characters, animae figures is unparalled in Japan itself. Action heros, animae and game figures, cuteness symbols and marketing mascottes are all part of daily life in Japan Towns and cites, brands and government offices all use these figures as marketing mascottes in promotional campaigns, Pipo-kun for example, is often used in street signs to direct and instruct the general public.

The undoubted highlight of the exhibition is the Hello Kitty girl’s bedroom, designed for the average Japanese tennager. This room clearly shows the deep-rooted need the Japanese have for their mascottes and comic figures in daily life. A wide range of comic book figures, action heroes, films and illustrations from the world of Manga and Animae will be on display in this retrospective to help you descover you what a comicbook hero really is and why they are so loved by the Japanese. Come and meet your favourite character, follow their development from the1950’s to the present and become acquainted with Japan’s comic heroes of today.

For the whole family

The Kingdom of Characters exhibition offers something for everyone, in particular for children. They can have their photo taken with their favourite ‘character’ or play dress up in one of the many costumes available. Extra activities will be organised during the summer holiday, including Manga workshops and various lectures based on the theme of this exhibition, JAPAN: Kingdom of Characters.